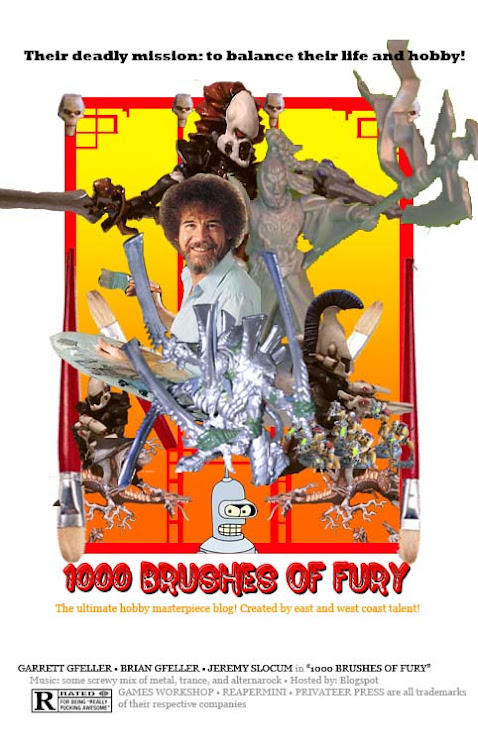 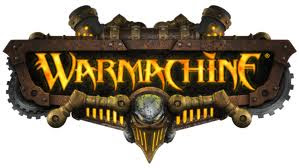 Good evening ladies and gentlemen... Brian and Garrett. This is a report of my first ever Warmachine battle! Neither of you play this game but it is fantastic and awesome (and cheaper).

Game: learning phase. Set-up and fight. I represent the forces of Cryx, lead by the Warwitch Deneghra. My opponent played the kingdom of Cygnar lead by the Commander Stryker. Players roll and highest picks to go first or second. First turn also deploys first. 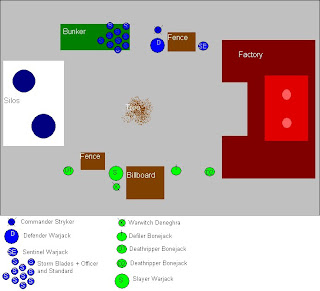 As you can see here we have a large factory on the right, a couple of silos on the left, a lone leafless tree in the middle. Forces deploy up to 10" away from their edge and 20" away from each other. The board is usually 4x4'.

In Warmachine one of the ways to win (if the mission has other ways) is to kill off the opposing warcaster (general). This is not as easy as it sounds! Each warcaster has the warjacks assigned to them. These steampunk engines of war have a magic-mechanical brain that responds to warcasters commands. Without the warcaster they become inert. Troop units can operate independently but can be aided by the warcaster via buffs or allocation of the game's central mechanic: focus.

Think of focus like mana. A warcaster can channel it into their own spells or directly into their warjacks or troops to make them more effective. Part of the game becomes a balancing act of using focus for spells, helping crucial units perform actions and getting your warjacks to wreak havoc on the battlefield.

While a warcaster is strong, they aren't the unit killing monsters like 40K characters. They aren't completely fragile but you have to calculate the risks you take with them.

I rolled higher so I deployed first to go first. 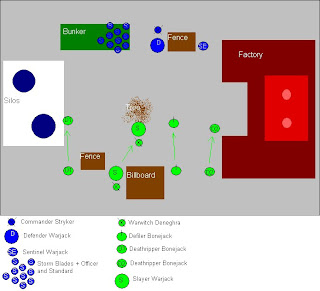 My units are directly from the Cryx battlebox. A cheap box that gives you the basic components to play the game: warcaster, units, unit stats, and basic game rules! You don't need the main rulebook to start playing! The starter rules are abridged to make it easier. Cards come with the units so you can mark damage on them (as applicable).

Cryx warjacks are light bonejacks (defiler is a shooter and deathrippers are close combat) which are fast and agile vs. the heavy helljacks (slayer is slightly slower but tougher and packs a wallop). Deneghra is a lithe, fast, debuffing witch very capable of dishing out damage but not as good at taking it.

Turn one had me running everything up and since nothing was in range (defiler has short range) I couldn't do anything. 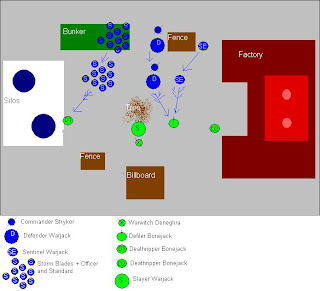 Stryker and his jacks run up. The Defender is a heavy with a gun and hammer. The Sentinel is a light with a gun and shield. The stormblades are troops wearing armor and wielding these sword pikes that shoot lightning. They start to go to town on my deathripper. The other two jacks aren't as effective at shooting me. 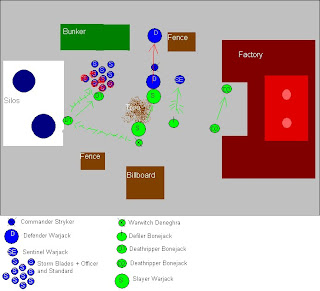 Fun times here: on the left Deneghra casts a damage spell called Scourge: it hits a target then a 3" AoE knocks everything around it (friend of foe) down. Being knocked down in this game is bad. Close combat hits automatically, on your turn to get up you have to sacrifice your movement or your action, etc.

You'll notice the spell arrow goes through the deathripper. Many bonejacks have an arc node which allows casters to channel spells through the 'jack. This keeps the caster out of harms way while spells rip open the enemy and your deathripper runs in and kills everyone! Almost.

My slayer rushes the defender and slams it causing it to fly back into Stryker causing some damage to both and knocking them down. 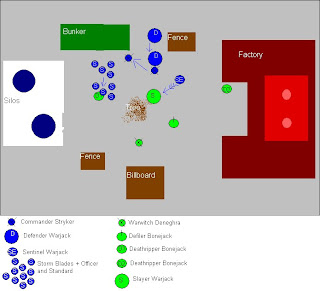 Here the stormblades get back up and countercharge using some of Stryker's focus. Stryker and the Defender reposition themselves and the Sentinel shoots at my slayer, damaging it some more. 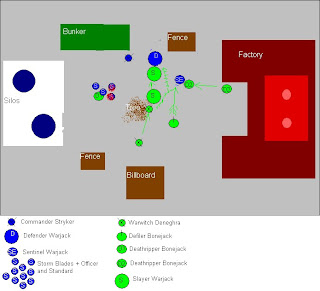 Stryker charges the Slayer with the Defender and wreak it. The stormblades take out my deathripper and the sentinel tries ineffectually to beat up my defiler.
Turn 4: Cryx 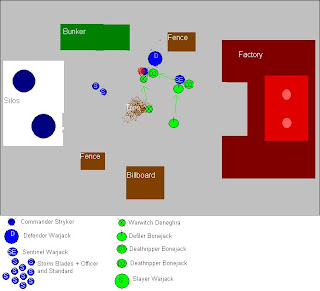 The defiler rushes the sentinel, knocking it out the way. Deneghra casts a knockdown spell on Stryker then rushes in with the remaining Deathripper and finish him off!
With Stryker dead all the remaining warjacks go inert and the remaining stormblades probably start to make a run for it. Victory for the Cryx, now let's go make a puppet show with their corpses! YAY!
Posted by J at 3:27 AM 4 comments:

New Aspect Warriors, the Shadow Spectres, and the new Grav-tank, the Warp Hunter.

The rules are linked below in the description. Overall I would say that while the intention for the units are cool, I feel that they just don't quite cut it as far as competitive units. Here are my arguments why.

1) 35 pts a model!?!? - Just like everything in the eldar codex, these guys are another OVER costed unit. I see the need to make them similar in points to Dark Reapers, but I was hoping that they would be more aligned to be a preview of the next Eldar codex as far as points values go. Running the numbers I found a full squad of 5 with Exarch Cynosure, and EMP Launcher to be 212 points!!! Keep in mind these guys are supposed to be an Anti-tank unit. For 212 points I can think of all other races and their equivalent choices and the sheer amount of firepower that they can produce versus these fragile pea shooters.

2) Not enough shots - Even if you upgrade the exarch to carry the EMP launcher thats still only 2 anti tank shots from a single unit per turn. IMO that's not enough, especially to warrant their high point cost.

3) Battlefield role?? - These guys were designed to be long ranged anti-tank support, a particular part of warfare the current aspects don't cover. I think these guys just don't cut it as far as being able to compete with other choices in the Eldar list for killing tanks. Yes the range is good, and the ability to use Jet-packs is great but again, durability and lack of shots are their downfall. Fire Dragons are way more efficient (perhaps overkill), a shooty Wraithlord is more durable, EML Wave Serpents handle smaller mech (Rhinos, Razorbacks, Chimeras) just fine, with Vypers, Warp Spiders, or any other Str 6 shooting able to do the trick as well.

All in all we'll have to play test them to see if they are effective in their designed roles or not. I am skeptical, but I must admit the models and fluff are badass. However I have said the same thing about other models....
Posted by Brewmaster at 10:44 AM 3 comments:

First up, I found this while I was browsing the other night. I don't think I would buy one but it definitely will be an inspiration for my Toys 'r 'us conversions.

Secondly, happy new year to everyone! Here is to another great year!

Third, I have been planning to purchase my own 'Battlefoam' so that I can transport my precious Nids without damaging them. I know the foam is expensive but I have found that with Tyranids they have too many eccentric arms, unusual poses, and spiky bitz that tend to make standard pluck foam or regular foam trays useless (Hormagaunts are a pain). I hope to have the foam by the upcoming tourney so I can transport my bugs in style/protection.

The first 3 Tyranid Shrikes have their wings and are ready to create havoc on the battlefield! Pics to come! On a positive note I have completed 96% assembly on all tyranids that I own and 46% of them are painted!! Whoooooo......
Posted by Brewmaster at 12:23 PM 1 comment: